My brother, Owen Alford, lost his battle with cancer on March 26th, 2012 (OwenAlford.wordpress.com). We were life-long friends. Owen followed me into bowhunting several years ago, bagged a blacktail buck, and then set his bow aside for several years while he worked nights and went to school during the day. It was always his intention to get back into bowhunting and he even bought a deer tag last year, but health complications kept him out of the woods. He loved being outdoors and took up kayaking after being diagnosed with cancer. Cancer cut his life short, but not his spirit.

Growing up, me and Owen spent a lot of time outdoors: camping, exploring, sometimes boating, sometimes hunting. We just loved “being out there”. The activity itself didn’t matter much; it was getting out and enjoying the outdoors that drove us.

Usually, the trips that went awry were the funniest later. One of those trips involved floating a canoe from Mapleton to Florence on the Siuslaw River. Neither of us had ever been on the Siuslaw before or spent much time on any river for that matter. Three things happened on that trip that we did not plan on: the river meandered all over, making the river miles longer than the road miles; the sun beat us like rented mules; and the tide turned. Halfway down the river we were sunburned to a crisp. We looked like lobsters wearing life jackets and as our burned skin chaffed on the flotation vests, our arms felt like they were going to seize up and fall off as the tide turned against us. It never occurred to us that the river current would turn and flow the opposite direction during high tide. By mid-afternoon, we found ourselves thirsty, exhausted, sunburned, and way the heck out in a marsh, no where near the road or our car, paddling against the current.

Eventually, we managed to make it close enough to the road where we could stash the canoe and hike the remaining miles to our car. 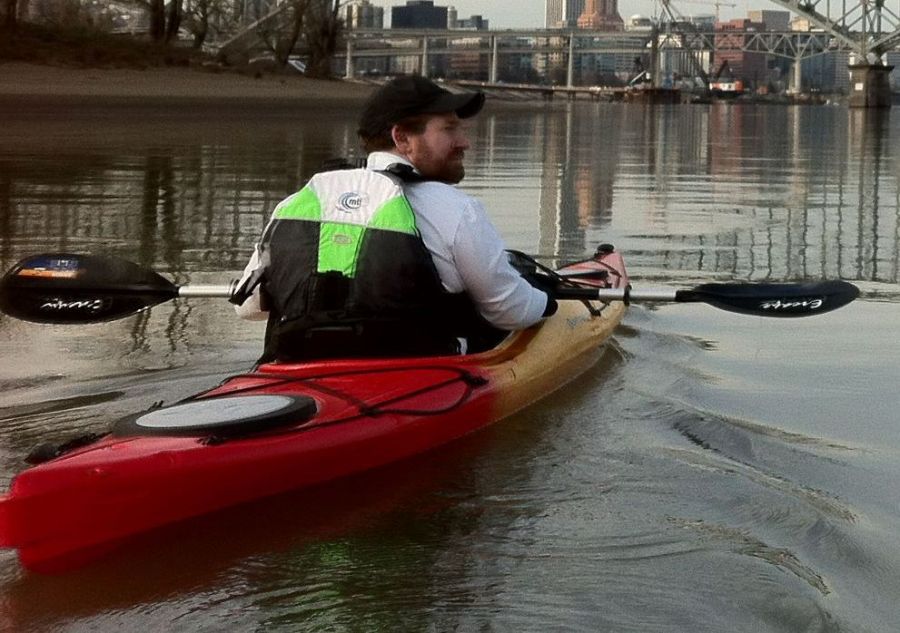 Along the way, we passed a country store with a walk-in beer cooler. We stood in that cooler a long time, hoping our country-fried skin would go numb. That may have been our last canoe trip ever. It certainly was our last attempt at floating the Siuslaw.

I had to chuckle last fall, when Owen told me that he and his friend, JR, had done something similar while kayaking on the Columbia River near Portland. Some fun lessons just get to be learned over and over.

We also had the usual run-ins with the weather. On one trip to eastern Oregon, we left on a camping trip after work, drove halfway, and then rolled out our sleeping bags in the back of the truck around midnight. They were those flimsy “best used in the house” sleeping bags and we froze our butts off. By 5:00am when the log trucks started rolling by, our bags were covered with ice and we must have looked like human icicles.

And of course, no Oregon bowhunter’s life would be complete without at least one nightmare elk hunt during the November late season on the coast. We setup our tent in an old rock pit and then the weather proceeded to storm for four days. We had no stove, only a tiny propane heater and each morning we started the day by pulling on our cold, soaking wet clothes from the day before. We stomped around in the blowing wind, hail, and rain, through head-high brush, day after day. 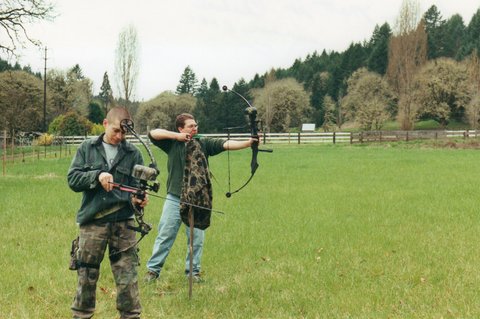 On the fourth day, we awoke to find our stuff floating in two inches of water inside the tent. Our air mattress barely kept us out of the swamp. No such luck for our gear. That trip sucked. The only elk we saw were feeding on the road in a hail storm, while we were driving. Of course, they immediately vanished in the five-foot-high salal brush as soon as we got out, long gone down an impossibly steep, nasty, brush infested ravine that we had no hope of getting in or out of.

Owen never hunted elk with me again. That was his first and last elk hunt. He was convinced that I was more interested in hiking into impossibly nasty areas than actually bagging an elk and he couldn’t see any point in it. I was convinced that it was the nasty areas where we would find the elk of our dreams. In the end, Owen decided my style of crazy was too much for him and he chose to hear about my subsequent elk hunts after the fact, rather than follow me in into nightmarish brush. He was not entirely wrong. For reasons which elude me, to this day, if there’s a nasty brush patch nearby, somehow I end up hunting in it. Owen’s common sense apparently served him better than my own.

I had hoped to take Owen to see some of my favorite backcountry places, but once cancer took hold, those sorts of hikes were beyond his reach. The time slipped away along with his health and then he was gone. My hopes for a miraculous recovery or remission never happened. Owen left me his hunting and camping gear and I’ll take part of it with me whenever I head into the woods. It’s not him, but it’s a little piece of who he was. He was my brother and a hunter and I loved him very much. Rest in peace, brother. You will always be with me. And if it’s not too much to ask, please check in on me from time to time and turn the wind in my favor. I still need all the help I can get.