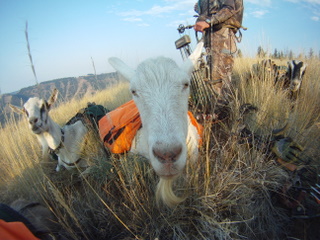 Question: what kind of whackos spend 15 days in the backcountry drinking muddy iodine-flavored water, eating the same food day after day, and chasing elk from dark until dark? You guessed it: the same two guys and eight goats who went to Hells Canyon for a spring bear hunt. Why? Because IT ROCKS! Archery elk hunting in September during the rut is an experience like no other. Everyone should go into the woods during September at least once and listen to bull elk bugling. The sound is eerie, magical, and beautifully wild. I look forward to it every fall, and this year, we were fortunate to be able to spend two weeks in Hells Canyon, living briefly with the creatures that inhabit this area year round.

Did we get the chance to put an elk in the freezer? You bet. Did we? Uhhh…..well, no….I…uh…shot and missed. Okay, I BLEW IT! There it is, I said it. I bungled a really close, easy shot after getting caught up in the moment, staring at the horse-sized bull elk and his herd of smaller bulls and cows running straight at me. My heart was pounding and the adrenaline rush made the simplest tasks nearly impossible. In the frenzy, I aimed my bow incorrectly and shot my arrow right under the bull, skewering a tree instead. D’oh!

I regained my composure, grabbed another arrow, aimed, shot, and…and…and hit a tiny branch, sending my arrow ricocheting off in the wrong direction. Double D’oh! AAAaaaaggggghhhh! Why? Why, Gus?? Why am I my own worst enemy? After hunting dark ’til dark for a week, I get this perfect shot opportunity and completely choke. I could have killed that bull by throwing a rock from that distance. Hell, I probably could have run him down and stabbed him Tred Barta style, he was that close. Somewhere, there is an elk god laughing his hooves off at me…again. Oh yeah, I can hear him, “how’s that tag soup taste, Goathunter?”

So, did I quit and go home? Hell NO! I did what most other completely irrational people would do: I stayed out there another week, eating moldy sandwiches and gritty water. 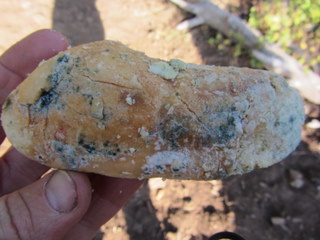 My buddy, Brandon, got a shot opportunity too. Remember that pesky little branch that deflected my arrow? That branch’s cousin got in the way of Brandon’s arrow, sending it flying off into oblivion. More laughing elk.

Alright, enough whining. We had a great time, despite the fact that we came home without meat. A trip like

this is about filling the freezer, but it’s not JUST about bringing home the best steaks in the world. We got close to bears, we ate blue grouse, we saw huge bull elk, and fiery sunrises and sunsets. We extracted water out of mud and endured searing heat, pouring rain, freezing cold, two weeks without a proper shower, and the worst smelling socks in the world. What’s not to like?

Will we go again? In a heartbeat. Next time, I hope my heart beats a little slower and I aim a little better. After eating all those moldy cheese sandwiches, I’m extra hungry for elk steak!

To see more photos and videos from the trip, click here.
Note: the videos are shot in HD format. If your computer has trouble playing them, try downloading this free video player.